C.P. for short, or George (but only his grandma calls him that)

Red. Ginger. Copper. Orange. Call it what you like, you can’t miss him. It’s not only the colour, it’s the shine. He’s like a Belisha beacon (if you don’t know what this is – look it up). Copper Pie gets fed up really quickly if there’s even a hint of teasing about his hair (or his matching freckles) – so don’t go there. Because he’s also pretty quick to use his fists. He’s much better now than he was at nursery, or Reception. He didn’t used to bother talking, just bashed people in, but occasionally he remembers to try and deal with problems by negotiation, or by letting one of the other Tribers negotiate for him. Don’t get the idea he’s all bad. He’s loyal, like a dog, and funny and fantastic at every single sport ever (except swimming – he sinks). But back to bad things – he eats like a dustbin, particularly pies, sausage rolls, crisps – all of which have too much fat, according to Bee – Tribe nutritionist. And he’s only interested in guns and war. 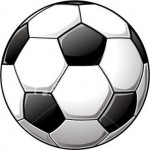 A kick from 30 metres out that dipped over the head of the goalie of Chandos School to tuck in under the bar and win the game.

One little brother, Charlie, who is actually quite nice but who Copper Pie thinks is a savage (look who’s talking). His mum runs a nursery on the ground floor of their house – it’s clean and tidy and very organised. Upstairs where they do their living is a pit, fit only for lazy slobs. Copper Pie’s dad is a lazy slob, says Copper Pie’s mum, and he’s also an engineer and mad about football. He plays for a veterans team with Bee’s dad.

Dream’s not the right word, because it’s gonna happen. He’s gonna be discovered, scouted, by a top team . . . maybe even ManU. Football and training, all day every day. No adding, writing, learning stupid dates for history, science – just football.